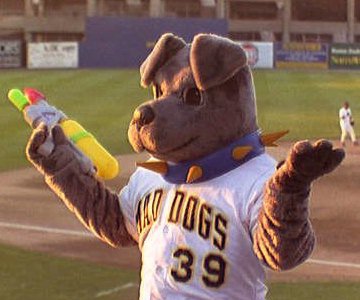 Spike the Dog was the mascot of the Massachusetts Mad Dogs who played baseball at Fraser Field in Lynn, Massachusetts.

In a North Atlantic League game on 20-Jul-96 against the Nashua (N.H.) Hawks, Spike visited Holman Stadium with the Mad Dogs. Hawks fans enjoyed the antics of Spike and of die-hard Mad Dogs fans who made the trip. The Hawks' season ended soon after as their late bill-paying got them locked out of Holman. Several Hawks fans then became Mad Dogs fans, notably one who shared the mascot's name. But this closure gave fewer fans to the Mad Dogs than it gave default victories to the Catskill Cougars, who came from nowhere to beat the Mad Dogs in the last North Atlantic league championship.

The Mad Dogs joined the Northern League for their three final years. 1-Sep-99 was the last Mad Dogs game, as the team prepared to take a one-year hiatus while a stadium was built in Hartford.

In 2000 and 2001, Spike summered in a self-storage facility in Connecticut, but the Hartford stadium was never built. Management finally relocated to Wahconah Field in Pittsfield, Massachusetts, but gave locals the choice of team name, and the resulting Black Bears had no spot for an old dog.

Seeing that the vagaries of business were preparing to put down this uppity dog, the other Spike stepped in and arranged a merger of identities. The team insisted that the reborn dog entertain the fans at Wahconah, and this happened on 23-Jun-02. Spike also returned to Holman stadium, now reopened by the Pride, and made one visit to the Brockton Rox, but spent the most time in the collegiate summer league with the Concord Quarry Dogs. 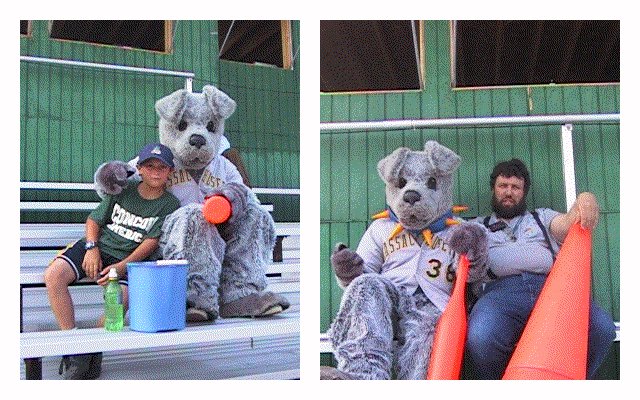 Spike with bodyguard; and with Nashua Pride cheerleader "Cone Man" (whose megaphone in 2002 was classified a Prohibited Artificial Noisemaker)

Spike is down half a foot from his erstwhile height, although drastic and sudden changes in weight and height are routine for baseball mascots. As the official mascot, Spike wore Mad Dogs #39. He now wears a road uniform, Massachusetts #38. As small-scale scams involving baseball memorabilia resulted in the loss of his permit to carry, the trademark Super Soaker is replaced by a Wiffle-ball bat.

Spike displays extreme curiosity about fans' hairstyles, clothing, and cell phones; wanders into the press box, team bus, and bullpen; stomps around with clenched fists as though in a hurry to scold someone; stalks your team's mascot; and signals opposing players to bunt or issue an intentional pass in inappropriate situations. Sometimes he just sits in a lawn chair and keeps a scorecard. He is adequate with a bucket of noisemakers that includes a set of cowbells. Apart from that, he has no routine and utterly no dance moves.

Generally, Spike does not talk, being a dog, and obeying the usual sports-mascot Omerta. However, when anyone named Héctor or Otis bats for the opposing team, Spike moves directly behind home plate and salutes him loudly by first name, just as the ball is pitched.

Aside from promised appearances, Spike turns up at games if the temperature is mid-70s or cooler with no rain in the forecast. A makeshift ice vest doesn't exactly make the experience comfortable but provides something pleasant to concentrate on. Spike endorses Febreze fabric refresher and is more nearly clean than in years (for those who like that new-car smell). He ingests the business end of a Black & Decker leaf blower after every performance.