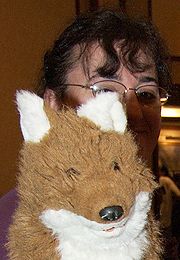 Spectra Vixen (also known as Spectra Fox; born May 30th, 1978) is a kitsune from Minnesota, U.S.A. She is a truck driver who is working to restore her Commercial Drivers License.

Spectra was born in Missouri and grew up moving from California to Washington state to Michigan to Texas. From Texas, she moved up north back to Joplin, Missouri before moving to the St. Louis area where she lived for ten years, the longest period of time. By then, she moved out of her family's house to Maryland, then to Pennsylvania. After that was a short period in Illinois. As of October, 2012, she lives in Rochester, Minnesota with her two mates, Butterscotch Vixen and Fyremane Stonebender.

Spectra's most recent convention was Midwest FurFest 2008. Half a month later, she suffered a severe accident which resulted in the loss of her right arm. She was released from hospital on December 30[2].