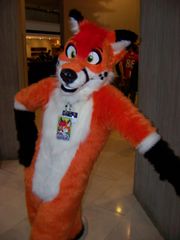 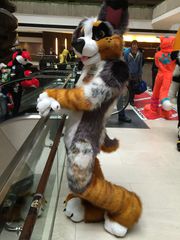 SpazzFox is a fursuiter who lives in Ontario, Canada.[1]

Spazz has been involved in the furry fandom since the mid-to-late 1990s.[1] Spazz participates in conventions mostly as a fursuiter, and sometimes appearing in panels and full time staff for Midwest Furfest as the Social Media and Public Relations Director. He is very active on Twitter. He's been married with Syber since 2018 and in the following year, Syber moved into Canada to be more close with Spazz

SpazzFox's fursona is a red fox.

Spazz also owns two other versions of his character, a second created by Made Fur You in 201& and a Dont Hug Cacti version, also created in 2018.

Other videos featuring Spazz include: