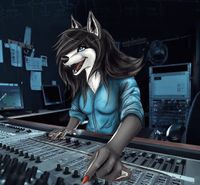 Sparx on a soundboard. Art by Truffles Tiger.

"Hesk" or "Hesky" - A jargon on the word "Husk" or "Husky". See Siberian Husky. Sparx often uses this nickname when self-identifying her species. [2]

While growing up, Christine Dawson discovered a striking interest in the popular cartoon television show Tom & Jerry. This was one of her first interactions with anthropomorphism. In late 2010, Christine came up with the fictional anthropomorphic character "Sparx Traxx" while she was studying PLTW engineering and musical arts in high school. Most of her inspiration behind the first name "Sparx" had to do with electricity; hence why some can distinguish "Sparx" as a slang variation of the word "Sparks". While the last name "Traxx" is a spinoff on the word "Tracks". See Track (CD) As Christine graduated from high school she went on to study Network Infrastructure at The University of Northern Texas. While in study she discovered the internet demoscene music culture which sparked her interest in chiptracking.

Sparx Traxx shares many key traits with her owner Christine such as her birthdate and location. Sparx has a fluid interest in music, a curious but keen personality, and an identical fashion sense. Her clothing style can be best described as post 90's retro punk / contemporary grunge -or- scene. Some signature articles of clothing Sparx wears include an electric blue zip-up jacket, black ripped skinny jeans, checkered Vans. She wears a beanie at ALL TIMES, the color of the beanie can differentiate between black, red, and electric blue with stripes. In other instances, Sparx can be seen wearing dresses and skirts. Sparx has graduated lip rings called snakebites, and gauged ears with hollow plugs. (Those of which can be various colors as well.) Another distinguishing feature included in some older art pieces of Sparx shows her wearing an Electric California brand hat on one of her ears. She also wears a black leather choker collar which has a hollowed out chrome lightning bolt around the ring. As far as her personality, Sparx always has something new to talk about. Just like Christine, she prides herself as an extrovert. Sparx is described as a humble loyal and down to earth character. But easily agitated when her buttons are pushed. Standing up for others & herself is a very keen trait she has, and she is not afraid to get down and dirty when it comes to solving problems! Sparx enjoys public events, sharing her music library with others, producing different styles of music, and ultimately networking with new furs!

Sparx Traxx is a trans female anthropomorphic Siberian Husky who stands 5'7" tall, non feral. [3] When Sparx is drawn, her body includes the typical female hourglass shape, feminine curves, breasts, but alternatively male genitals. [4] The most distinctive part about Sparx is the black lighting bolt insignia she has on the uppermost part of her left breast. Sparx prefers to be addressed by female pronouns ♀ [She / Her]. She also openly accepts mixed plural male/female counterparts in a GenderFluid context i.e. "They -or- Them". Sparx was born biologically male, and physically transitioned from male to female in her early teens. ♂→♀. She identifies as Pansexual with a female preference. There have since been 3 consecutive versions of Sparx since the initial creation and publication of the character in 2010. 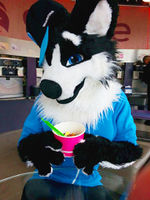 In 2013, Christine pitched a design idea to an amateur fursuit maker by the name of Truffles Tiger from El Paso, Texas. [5] After 10 approximate months of crafting, the conceptual partial fursuit of Sparx was completed. [6] The finished suit itself included a foam base head, stuffed tail with belt loop holes, and four fingered arm sleeve paws. All of which resembled the design of Sparx in 2014. Christine first debuted the suit February of 2014 at Texas Furry Fiesta. Following the debut of the suit at the con, Sparx would also make various other appearances outside of furry conventions. Some of which included volunteering as an independent mascot / performer for the high school that Christine attended, public outings that can also be referred to as furmeets, and several other holiday themed events. Those are just some documented activities that the Sparx 1.0 partial fursuit were a part of in 2014. In February of 2015, Christine attended Texas Furry Fiesta for an second time with the Sparx 1.0 partial fursuit. During Sunday night of the convention Sparx appeared on the main events stage and played a one hour long live DJ plug while in partial fursuit [7]; However, during the summer of 2015 the partial was maliciously destroyed. [8]

Before the unpredictable events of the destruction of Sparx 1.0, Christine had commissioned an updated version of Sparx in partial form from Lazy Lion Creations in December of 2014. [9] Approximately 9 months after the initial commission start time the Sparx 2.0 partial fursuit was completed. [10] The partial resembled the updated design of Sparx in 2015 where one of the most noticeable changes to the design included shorter hair with a fauxhawk style to it. The finished suit itself included a foam base head and four fingered paws that only covered up to the wrist. Christine first debuted the suit October 16, 2015 at Arizona Fur Con during her one hour long live DJ plug on the main events stage at the convention. [11] Sparx Traxx was also held as a guest of honor at the convention. [12] After Arizona Fur Con, Sparx made an additional debut on December 6th, 2015 at Midwest Furfest. Sparx regularly attends events not limited to furry conventions such as raves, anime conventions, computer gaming seminars, underground parties, and local furry furmeets.

During high school, Christine was rigorously involved in her school's marching band. She played in the drumline and competed in national competitions such as Tournament of the Bands in 2010. Early in Christine's musical endeavors, she also played the electric keyboard and backing leads, which also included various types of synthetic instruments for two independent bands. “If We Were Turtles”, a math-rock and experimental jazz band & “Endeavor”, a grunge-punk “screamo” band. She also ran live sound mixing and later on helped in the recording of demos. In 2010, both bands had residency at lounges such as “The Percolator”, ”Sumatra”, "Club 101". While in these bands, Christine started to learning the fundamentals of music production and started picking up on tracking chiptunes. During the time she wasn't practicing with bandmates, she was learning how to beatmatch and started researching spinning on vinyl records. Both bands separated in 2012 so Christine got involved with the local nightclub scene in El Paso, Texas and started playing live DJ sets at Club 101, Club Envy, Tricky Falls, and at various un-noted Adult entertainment clubs. In 2013 Christine started publishing her work in progress projects onto the popular music sharing website SoundCloud.

Husky Butt Records is a tiny Record Label founded by Sparx Traxx on January 1st, 2017. [13] The label focuses mainly on the clash of 8-bit Retro chiptune music, and experimental indie dance. "Chiptunes" can also be understood as videogame music. Sparx Traxx releases music based on the principle of one track albums. See singles.