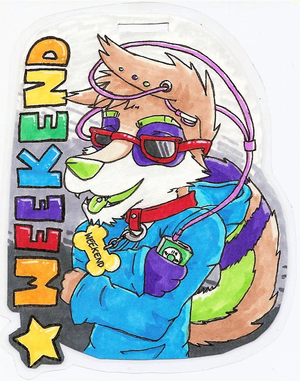 A sparkledog, also known as a Sparkle, is a term for a sentient character, with unusual hairstyles and fur colors or patterns, including rainbows. The term "Sparkledog" may also be applied to other non-canine species. Non-canine Sparkles are often referred to as Sparkleanimals.[citation needed] Furries with sparkledog fursonas are sometimes labeled wolfaboos.

"Sparkledog" originated as a derogatory term. However, the usage of the word has grown to be more neutral, with some furries using it in a proud or affectionate context.

Sparkleanimals are any animal with bright, "unrealistically" colored fur. Some furries have described this fur as having "clashing colors". They are often depicted with accessories or decoration including piercings, tattoos, and jewelry. Finally, they MUST have sparkles[1][2][3]