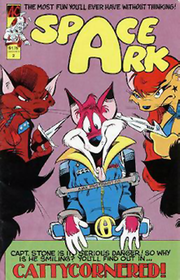 Space Ark was a funny animal comic book created by Ken Mitchroney and Mark Cantrell, originally published by AC Comics and later by Apple Comics. The series ran from 1985 to 1988, with a total of five issues printed. Usagi Yojimbo #22 contained a "Space Ark" back-up story.

The series featured the misadventures of a goofy starship crew that found itself in the strangest situations in their adventures aboard the USS Space Ark.

Atrax, an alien, is the main protagonist. He is aided by Sylth, a shorter alien who acts as comic relief.

The cast includes Captain Stone, a rather egomananiacal fox (who graduated from the Fur-Bearing Alliance ("Furball") Academy}; Kitty, a cat first officer who graduated from Furball with honors (so it's a mystery why she got stuck on the Space Ark); Doctor Whoot, a conceited owl who enjoys feeling superior to the rest of the crew; Brooklyn, a weasel engineer; and Slinx, a snake, the assistant engineer.