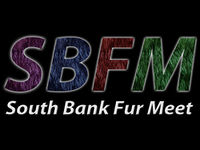 The South Bank Fur Meet (SBFM) is a weekly furmeet held every Tuesday in the South Bank Parklands located beside the Brisbane River in Queensland, Australia. It caters to furries across the Brisbane area and typically has an attendance of 50-70 people. The meet involves a $2 sausage sizzle, followed by a fursuit walk around the Parklands. It is run by a team of 6 admins. Contact information can be found on the SBFM Facebook page.

SBFM held its first meet in 2015 on March the 27th after the previous weekly meet, CBFM (Central Brisbane Furmeet), went monthly. It was originally organised by Tsukare Kitta, with help from the current staff members. On August 28, 2015, Tsukare decided to step down as an active admin and passed the meet onto Flicker, Chloe, and Ashtonoir (Who has since stepped down, along with Flicker) Current Admins are. Able,Shawn,Lady Black,NecrØshade95 and Mariki

People usually congregate around the South Bank Piazza until around 16:30, where the group moves off towards one of the many barbecues around the parklands. At 18:30 , the group will embark upon a fursuit walk, usually returning after an hour. The meet officially finishes at 19:30. However, many of the attendees visit Ginga (a local sushi restaurant) and further socialise until closing.