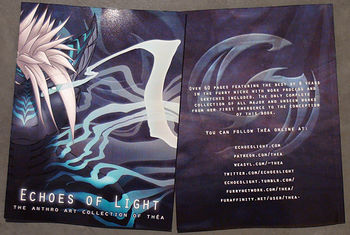 Théa, formerly known as Soulscape, under the business name Echoes of Light and non-furry handle AR Keay, is an artist who lives in British Columbia, Canada and has majored in freelance art since 2008. Her fursona is a shredon (a shark-dragon hybrid species).[1]

Soulscape drew the Fur Affinity banner for October 2012.[2] She was the Artist Guest of Honor at RainFurrest 2013.[3] Was art department head of BronyCAN for 2014.[4] Was the Community Spotlight at VancouFur 2016.[5] and also has contributed to the convention for a consecutive 6 years.