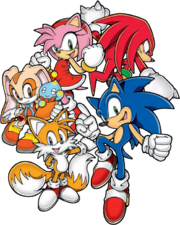 The most notable characters, Sonic, Tails, Knuckles, Amy, and Cream.

Sonic the Hedgehog is a popular series of video games by SEGA, created in 1991 and starring a blue hedgehog called Sonic embroiled in constant battles against his nemesis/rival, Dr. Ivo Robotnik (also known as Eggman).

There have also been several spin-off cartoons and comics. Sonic is heavily popular in the furry fandom, although his friends, Tails the two-tailed fox as well as some of the other characters, are often more popular than Sonic himself. There is a Sonic the Hedgehog comic book series begun by Archie Comics that features characters like Sally Acorn, Bunnie Rabbot, Antoine D'Coolette, Rotor J. Walrus, Dulcy the Dragon, Rouge the Bat, Cream the Rabbit, Shadow the Hedgehog, Silver the Hedgehog and many others, all of whom tend to be as popular, if not more than Sonic. Note that some of the characters appear or don't appear in all the various Sonic forms of media.

Sonic the Hedgehog is the game that began the series on the Genesis (the Mega Drive outside North America) and was followed up by two direct sequels, each introducing a number of new characters and enemies. A spin-off was released for the Sega CD (also known as the Mega CD outside of North America) called Sonic CD which introduced time travel and prerecorded CD music as major features.

The first Sonic game with 3D graphics and gameplay was Sonic R, which was released in 1996 for PC and the Sega Saturn, although the Special Stages of Sonic the Hedgehog 3 and Sonic CD featured 3D movement before that. The first fully 3D traditional platformer game in the series was Sonic Adventure in 1998 for the Sega Dreamcast which got a sequel of its own called Sonic Adventure 2 in 2001.

The Sonic Advance series was the first old-style 2D platformer for a while, and it was released for the Game Boy Advance in 3 instalments: the first in 2001, the second in 2002 and the third in 2004. Sonic The Hedgehog was the title of a 2006 game, known to many people as Sonic '06, which was critically slammed for having a strange story, numerous bugs and glitches and almost being unfinished. Sega achieved much more success with Sonic and the Secret Rings, the first in the Sonic Storybook Series in 2007.

Sonic Unleashed followed in 2008 and had an feature of Sonic being transforming into a werewolf-like creature know as a "werehog" at night. The second and final game in the Sonic Storybook Series was Sonic and the Black Knight in 2009, an open world game with swordfighting gameplay. 2010 saw the release of Sonic Colors (called Sonic Colours in British English) which is widely regarded as one of, if not the best 3D Sonic game. Sonic Generations was released in 2011 and was the first game to feature Classic Sonic, who was Sonic's original design, and his past self. They soon after released both parts of Sonic the Hedgehog 4 (Sonic 4 Episode 1 & 2), which was made as a direct sequel to the first four Sonic games, and the return of the 2D gameplay from Sonic Advance.

The mid-2010s saw a Sonic redesign (part of the series "Sonic Boom"), giving him a scarf and extra spikes. The redesign was received poorly, and was not helped by the negative critical reception of the games it was featured in. Sega returned Sonic to his original design shortly after. Soon afterward, in 2015, Sonic Lost World was released for the PC, and Sega created a mobile game called Sonic Runners based on it. Sonic Runners was received well, but the servers were shut down less than a year later in 2016.

Sonic Forces and Sonic Mania (2017) were both the most recent Sonic platformers, with both marking the return of Classic Sonic.

There have been multiple Sonic television shows, with the first being The Adventures of Sonic the Hedgehog in 1993, which followed Sonic and Tails as they try to prevent Dr. Ivo Robotnik from taking over Mobius. It was a fast-paced slapstick show, much akin to Animaniacs or Tiny Toon Adventures. It was succeeded by a science fantasy in 1995 show called Sonic the Hedgehog, often shortened to SatAM to avoid confusion with other shows and games. It is remembered fondly by many, and it is very popular among furries. The show takes a much darker tone than the other television shows and features many of the Freedom Fighter characters. Next was a series called Sonic Underground, made in 2000, featuring Sonic and his two siblings called Sonia and Manic, who have never appeared in any pieces of media since. The three characters play for a band who is trying to fight Dr. Robotnik, a mad doctor who wants to kill them and "robotize" the land. The fourth TV series was called Sonic X and was notable for being the first to feature the characters' modern appearance (their looks from Sonic Adventure and other games). It was an action-adventure-comedy-drama-science fantasy anime. The fifth and final show was Sonic Boom, a show about the characters from the series of the same name. It was much more well-received than the games.

There were three Sonic the Hedgehog comics, the first of which was Sonic the Comic, a UK children's' comic about Sega's mascot Sonic the Hedgehog. It ran for 223 issues between 1993 and 2002 and was published by Fleetway Editions. The next and most popular comic was Sonic the Hedgehog, a comic put out by Archie Comics that ran between 1993 and 2017. This comic featured many elements from the SatAM series and the games, and until the Super Genesis Wave event, it had its own stories. After the event in the comics, all the characters' histories were reset to be identical to the games. Archie Comics is also notable for publishing a few other Sonic the Hedgehog themed comics and even a Mega Man comic. The final and a still ongoing comic was published by IDW Publishing and had a continuity that stuck mostly to the games.

Sonic the Hedgehog and furry[edit]

Sonic, arguably one of the most popular game series in the furry fandom, is one of those series that is controversial due to furries. Some fans hate furries, some furries hate Sonic, some people became furries due to Sonic, while some furries were drawn to Sonic for its characters. Nevertheless, the furry presence is strong in the fandom. This especially common with fans of Archie Comics' Sonic the Hedgehog, which tended to combine many different art styles of furry animals before the reboot.

Yerf famously instituted a ban on all Sonic-inspired artwork after the archive was flooded with low-quality artwork related to the game.[citation needed]

Sonic, Tails, Amy, Shadow, Silver, Rouge, Cream, and Vanilla are amongst the most popular with furries, though most of the characters have some level of furry interest.

Sonic the Hedgehog has inspired a number of multiplayer worlds.