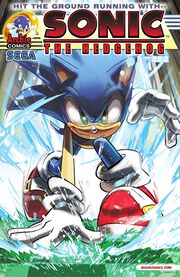 Sonic the Hedgehog is a comic book series by Archie based on Sonic the Hedgehog video games by SEGA. It was published every 4 weeks, twice in Feburary. It was based on the Saturday morning cartoon that aired September 18, 1993 to June 3, 1995 on ABC in it's original run.

The comic ran for 294 issues from July 1993 to February 2017. The Sonic the Hedgehog comic license was given to IDW Publishing, who began publishing Sonic comics in August 2018 and still make them to this day.

The home of the Freedom Fighters. Dr. Robotnik has always tried to destroy this settlement to prevent the Freedom Fighters from coming back to stop him. It was eventually destroyed in Sonic the Hedgehog Issue #175, leaving an empty wasteland called "the Great Wastes".

Robotropolis, formerly Mobotropolis, was a city owned by Dr. Eggman. It was originally a city for the different species of Mobius, until Dr. Robotnik took over, renamed the city "Robotropolis" and converted most of the buildings to factories to aid his empire.