somewolf is a typical inhabitant of the eastern European woodlands. He has been seen on two legs and on four, likes to eat Chinese food, writes poetry, and howls a lot. He is always on the search for a good dream.

somewolf is one of the organizers of HerbstCon and a former staff member of Eurofurence. In 2003 Eurofurence appointed him as Chief Improviser in recognition of his ability to overcome Czechnology. He is also an active staff member of Mephit Mini Con, where his stated staff function is "Wolf in Charge".

somewolf can be found on FurNet IRC, using the nickname huskygirl around the new moon days of each month. This is his second character, used to express his bi-weekly change in mood. 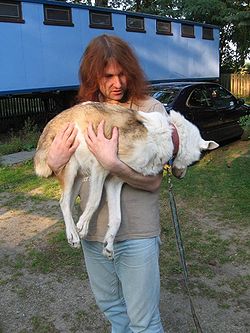 Born as the son of a gypsy mother, somewolf grew up almost as any other kid and attended a regular school, subsequently gaining several diplomas in both technical and non-technical areas. Starting in the early 90s, somewolf became a trainer of so-called "problem horses", even running his own training stables together with a friend in northern Germany.

At other times during the 90's somewolf worked for a big European oil company as an engineer. He spent his time off the job as a volunteer fire fighter, later becoming one of the fire chiefs in the same city. In 1999, after founding the German Wolf Association, he moved to Minnesota (USA), where he lived for almost three years and made his money with the DoD in research and testing jobs.

somewolf was involved in the International Wolf Center efforts to educate the public about wolves by running live wolf events. He worked with Lynn Rogers and David Mech and was a staff member of Wolf Park. Sadly for several people in the U.S., he decided to go back to Germany. After he returned, he did some lectures for the German Wolf Association and traveled the country.

somewolf lived and worked at a sanctuary south of Berlin, the Tigerranch, for almost one and a half years, but decided to look for something with more of a future. After travelling the country once more for over eight month he is now working in the quality assurance department at the headquarters of an industrial automation manufacturer.

somewolf's relationship to wolves was first noticed at school when he was age 11. He gave several talks about wolf biology in school. His strong connection to nature and all kinds of animals was more than an accident of birth. Even though he had knowledge of the furry fandom in the 90's (having had internet access since 1992 and email since 1988), he never managed to arrange the time and/or effort to join any activities. After his move to the U.S. he met furries like Jessica Willard and Uncle Kage at Wolf Park. His efforts to join the Frozen Furs in Minnesota weren't successful.

After returning to Germany in 2002, somewolf joined the European fandom by becoming a staff member of Eurofurence and co-organizer of several other events. He was[citation needed] a member of "Eurofurence e.V." - the legal body that runs Eurofurence - and a founding member of "FurCon e.V", who run FurCon.de and the Mephit Mini Con. He became known in the German fandom by traveling the country for two and a half years, visiting furries and being involved with activities of all kinds.