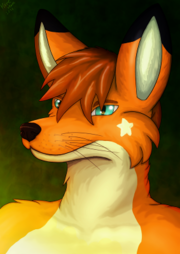 Solis Astral, by Hircreacc.
Solis Calleo Astral (born March 6, 2001)[citation needed] is a furry fan that was born in West Virginia,[citation needed] and currently resides in West Virginia.[citation needed] He was a curator for the app Furry Amino and was the sole writer of the weekly magazine, "Furry Weekly," which he started himself on August 2, 2016. "Furry Weekly" has since then been split up and individual segments given to other furs, however Solis is still the publisher, an editor, and the president of "Furry Weekly!" He still runs a few segments in the magazine, but not as many as he once did. He first joined the fandom in February of 2016, and is the owner of the "West Virginia Furs" group on Telegram. He also spends time composing music and writing, and is trying to take up art as well.

Solis Astral's fursona is a red fox, whose two primary colors are orange and cream. He can be distinguished from other foxes by a star on his left cheek, a light-orange music note on his left shoulder blade, aqua-colored eyes, four cream-colored paws, black tipped ears, and a black-tipped tail. His fursona stands 5'11" tall and weighs in at approximately 220 lbs. His fursona is pansexual and can often be seen wearing casual clothing (i.e. shorts, t-shirts).

Solis Astral can be found on several forms of social media.

Solis was a curator of Furry Amino. Not only this, but he also writes, and publishes, along with his staff, a weekly article on this Amino community entitled "Furry Weekly," which delves into the depth of unknown artists, fursuiters, writers, musicians, etc. and brings them to the surface, bringing them attention in the furry fandom. As of September 7, 2016, Solis Astral had 1,196 followers on Furry Amino.

Solis can be reached on Telegram via his username (@Solis_Astral). He is the creator of his state Telegram group, which, as of September 1, 2016, had 40 members.