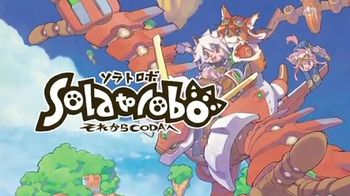 Solatorobo: Red the Hunter is a furry 3D action role-playing game. A spiritual sequel to Tail Concerto, it is considered the third of the Little Tail Bronx series, along with Mamoru-kun. It was originally released in Japan on the Nintendo DS on October 28, 2010.[1] The English version for Europe and USA was released on July 1, 2011.

The game was developed by CyberConnect2 and published by Namco Bandai.

The story revolves around a handsome young Caninu/hybrid named Red Savarin, who lives on the floating islands of the Shepherd Republic, home to two races, Felinekos and Caninus. Red Savarin is requested to obtain an important file that has been stolen and sneaks aboard the large Hindenburg air ship. Upon trying to escape, he runs into Elh Melizee, a very mysterious Felineko. Soon, he and Elh travel all across the Shepherd Republic along with his younger sister Chocolat Gelato, uncovering mysteries and discovering the secret behind Elh's hidden past.