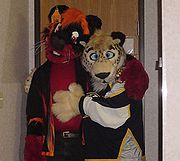 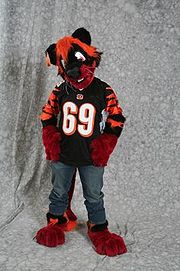 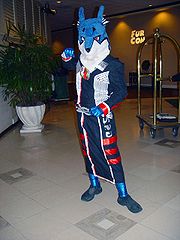 Sodders, also known as Sodders Spectre (born 25 May 1985 in Omaha, Nebraska,) is a fursuiter who lives in Madison, Alabama, U.S.A.[1] He works as a Service clerk at a Walgreens.

Sodders' fursona is a Fire Liger, a hybrid of a lion and a tiger, with an orange mane, black fur and orange stripes. He has a flame at the tip of his tail.

Sodders has been involved with the furry fandom since September 25, 2005, when he joined Second Life as "Sodders Spectre". He is mated to another fursuiter, Fyrefang for the better part of one and a half years so far.

Sodders has two fursuits. The one of his fursona is a partial fursuit created by Snow Paws Studios.

Sodders' other fursuit is Doggie Kruger, a blue dog from Tokusou Sentai Dekaranger, a children's show in Japan. The fursuit head was created by Noble Productions.