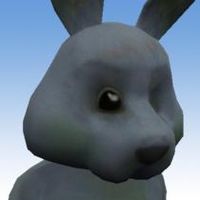 The Social Bunny is an invisible bunny fursuiter in The Sims 2 that only appears to a sim that has an empty social bar. The user can do anything from kissing to slapping the bunny. The social bunny will leave their home when the sim's social bar is back to the halfway mark. If you have more then one social bunny on a lot, they interact with each other.

In appearance, the bunny suit is a bit roughed up, actually missing one of its eyes. Some have speculated that the Social Bunny is based on Frank in the movie Donnie Darko.

Entering the debug code at the character creation screen allows users to fursuit in one of three different colors as the Social Bunny. The character is separated into parts with the head as a hair option and the body as clothing, so it is possible to have the fursuit on without the head. The bunny dosn't speak but the sim using the bunny can understand him.(or her)

Other The Sims 2 Furry Characters[edit]