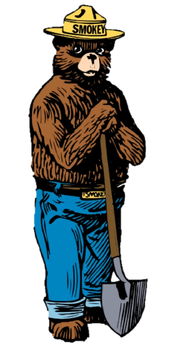 Smokey Bear, often unofficially referred to as Smokey the Bear, is a mascot of the United States Forest Service created to educate the public on the dangers of forest fires in the contiguous United States.

Although the US Forest Service fought wildfires long before World War II, the war brought a new importance and urgency to the effort due in part to the Empire of Japan attempts to firebomb the United States, and the loss of available experienced firefighters and other able-bodied men in the continental US joining the US armed forces, leaving fewer people at home to fight forest fires.

The WWII Forest Service began using posters to educate Americans about the dangers of forest fires in the hope that local communities could prevent them from starting in the first place, either due to careless citizens or the before mentioned Empire of Japan considered wildfires a possible weapon (the Japanese military launched some 9,000 fire balloons into the jet stream during the war, with an estimated 11% reaching the USA between November 1944 and April 1945). 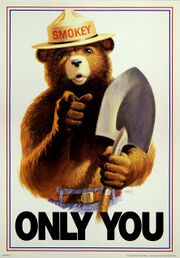 The most classical Smokey Bear poster

After much discussion, a decision was made to create a mascot for the Forest Service, choosing a bear which was named Smokey, inspired by "Smokey Joe" Martin, a New York City Fire Department hero who suffered burns and blindness during a bold 1922 rescue.

On August 9, 1944, the creation of Smokey Bear was authorized, and the first poster featuring him was delivered on October 10 by artist Albert Staehle. In the first poster, overseen by the CFFP, featured Smokey was depicted wearing jeans and a campaign hat, pouring a bucket of water on a campfire. The message underneath read:

In 1947, the Wartime Advertising Council (later the Ad Council) coined the slogan now associated with Smokey Bear for more than five decades:

In 2001, the slogan was officially amended to replace to read:

In response to a massive outbreak of wildfires in natural areas other than forests, and to clarify that the campaign was advocating the prevention of unplanned fires, not controlled burns or prescribed fires for conservation purposes.

Since his first appearance, Smokey has also featured in other forms of of media, like cartoons, radio programs, comics, merchandise, and commercials.

Although there is SFW Smokey Bear's media and literature in the furry fandom's furry media archives and social media, It is more common to find adult content of the character in the fandom, sometimes based on several of the Internet rules (Rule 34, Rule 36, Rule 63, and Rule 76).