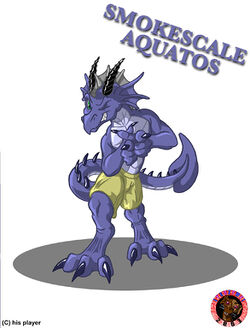 He began writing for the furry community shortly after beginning college in late 2002 and has continued to produce material.

Smokescale has several characters that he has written about.

Smokescale prefers to work on his own original series versus writing fanfiction, but has been known to write the latter in very rare instances.

Current story series in progress include:

Story series available on SoFurry that he has completed include:

Story series available on Amazon that have been completed include:

What work he has made available freely to the public can be found on his SoFurry account.

As a character, Smokescale Aquatos is a blue water dragon, found generally to be around 5'9" tall, slim build and is the owner of a fictional resort known as the Treetop Inn. Almost every character created by the writer exists here in some fashion as a member of the staff under Mr. Aquatos' employment.

Due to his in-story relationship with the angelic dragon Shayna, his gender is constantly in flux. Originally male, he can be found shifted between various sexes at Shayna's whim. This is a source of much of the goings-on in the stories themselves.

Originally, Smokey possessed a greyish hide (hence the name Smokescale) but as time passed, he became blue reflecting the author's favorite color but the grey remained a mainstay along his chest and belly.

Smokey also originally possessed a membranous crest running along the center of his skull, but after commissioning his good friend, Fenrir Lunaris, the artist presented an interpretation of him with long hair or a mane. Smokey found this to be more appealing and decided to make that the norm.