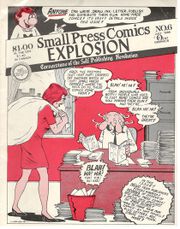 Small Press Comics Explosion was a nationwide, comic store distributed publication, that specialized in exposing, showcasing, and reviewing any and all small-press comic books or fanzines, with a fair share of furry titles in it, to the general public.

The magazine was published and written by Tim Corrigan during the early to mid-1980s, and it featured reviews and ads for hundreds of small press publications. Small press is defined as self-published comic books.

The Small Press Comics Explosion was the hub for the self-published comics movement. First printed as a newspaper and then in a magazine format. Tim's magazine inspired many people to create, share, and publish their own comics. When the SPCE ended, the self-published revolution network had no hub and fell apart.[citation needed] Now with the internet, connecting and staying in touch has never been easier.

SPCE did not create the movement but it gave self-publishing a meet, greet and sell marketplace (kind of like a paper eBay for self-published comics) that has never been replicated since.

When the black & white comic market went under SPCE went with it. No distribution and no orders killed that "bubble" in the late '80s.