Slyvester Greytail (also known as Sly) is a character in Extinctioners. He first appeared in Extinctioners volume 1, issue 1 (story and pencils by Shawntae Howard, inks by Malcolm Earle, and color by Eric Blumrich and Scotty Arsenault). 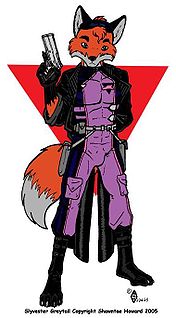 Son of Richard Greytail, Sly is also the first cousin of Redford Firefox. Sly was always a shy and quiet todd, who would often bury himself in his schoolwork and his love, starship mechanics. His studies in school were that of engineering and forensics. Sly loves a mystery be it of a technological origin or humanimal made. Sly was not born with any special powers like his cousin Red, but he is a very intelligent inventor and detective. On board the Solarfox, he is the ship's engineer.

Sly is trained in Vulpin Martial arts, which is a fighting form that has a lot of leg and leaping techniques, as well as standard military hand to hand training. Like Foxy, Sly is also a good marksman; not as good as Foxy, though he'd never let her know that, but does have a vaster knowledge of the use of various weapons. He is currently engaged to Foxy.