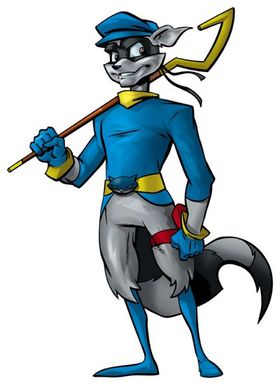 Sly Cooper (known as Sly Raccoon in Europe) is the star character and protagonist of three platform games created and developed by Sucker Punch Productions for the Sony PlayStation 2. The fourth entry in the series was developed for PlayStation 3 and PlayStation Vita by Sanzaru Games and was released 2013.

While the games feature characters that are considered 'furry' by the fandom, it is unlikely that they were created with furries in mind.

Sly is a young raccoon who is descended from a long line of master thieves who steals from other thieves and various criminals. He grew up as an orphan after his father was killed by a gang known as the Fiendish Five. This gang also stole the Thievius Raccoonus, a book containing the Cooper family's thieving techniques. Sly's quest to recover his family's book is the basis for the first game.

Sly's primary weapon in the games is his family's cane.

Sly Cooper is aided in his adventures by his friends Bentley, a brainy turtle; and Murray, a strong muscular hippopotamus.

Sly and his friends make their home in Paris, but the nationality of the characters is never made clear in the games.

The world in which Sly Cooper and his friends live appears to be inhabited only by anthropomorphic animals.

Sly's archenemy is Clockwerk, a mysterious robotic owl. He is likely the only animal in the game that is sapient, but not anthropomorphic. Clockwerk is revealed to have been hunting Sly's family line for years, which led to his decision to replace his body with machinery. It is also revealed that Clockwerk spared his life in the attack on his family to prove that the Cooper Clan would be unable to be great thieves without the Thievius Raccoonus.

In the first game, Clockwerk serves as the final boss, as well as the man "pulling the strings".

The second game focuses on a different gang, the Klaww Gang, who has stolen the pieces of Clockwerk's body that were left over after the first game to use in their own plans, and Sly's attempts to recover them.

In both games, Cooper and his friends are pursued by Inspector Carmelita Fox, a detective from Interpol. Although the two are bitter rivals, they team up on occasion to defeat common foes. Carmelita is also portrayed as a love interest for Sly. 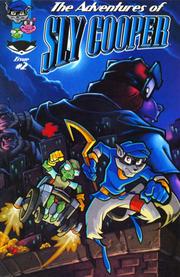 Sly Cooper and other characters from the games were also featured in a comic book published in 2004 by Gamepro Magazine to promote the release of Sly 2: Band of Thieves. Issue #2 was made in 2005 to promote Sly 3: Honor Among Thieves.

The third game, Sly 3: Honor Among Thieves, takes place about a year after Sly 2: Band of Thieves. It's the first in the series where Clockwerk isn't the main enemy.

The fourth game, Sly Cooper: Thieves in Time, was announced 7 years after the 3rd and continues where the 3rd left off. The story centers around Bentley reuniting the gang once again, and using his time machine to find the reason behind the vanishing of the pages from the Thievius Raccoonus.

Born into a long line of thieves, Sly was destined to inherit the archive of their techniques, the Thievius Raccoonus. However, Sly is robbed of his family and his inheritance when a ruthless gang of thieves raids his home and kills his family, along with stealing and dividing the Thievius Raccoonus. Sly winds up in an orphanage, where he meets his two best friends, Bentley the turtle and Murray the hippo. After forming their brotherhood, they set out to make a name for themselves. In doing so, they earn the attention of Inspector Carmelita Fox, whom Sly becomes rather attracted to.

After years of searching, Sly finds out where the Fiendish Five are and takes them down one by one. He learns about Clockwerk's relation to his family, and retrieves the Thievius Raccoonus. Afterwards, he tricks Carmelita with a kiss, and her reaction, though unnoticed by Sly, shows that she in turn cares for him.

Two years later, Sly and co. return to destroy the Clockwerk parts to prevent their use by evil. After surviving harrowing challenges, they defeat the Klaww Gang. Meanwhile, Sly's feelings of friendship with his pals and attraction towards Carmelita grow. This adventure ends in tragedy, as Bentley is permanently disabled.

A year later, Sly goes after the Cooper Vault, the location of his family's stolen fortune. Recruiting several new members to the team, Sly sets out to break into it. Along the way, Sly conflicts with the addition of Panda King to the group. Finally, during a near fatal encounter with Dr. M's simian monster, Sly realizes how much Carmelita means to him. After the final battle with M, Sly is hit and then fakes amnesia, causing Carmelita to take him home with her. In reality, Sly did it to grow closer to her.

Main article: List of characters in the Sly Cooper franchise