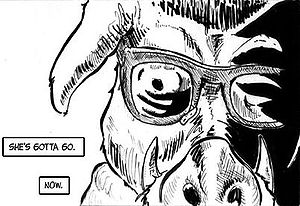 Slop is a mature webcomic created by Mulefoot. It has an overall storyline revolving around a vepr, a wild boar-like creature, of the same name (full name: Tony-Ray McCullough). Mulefoot is a violent character, often committing rapes and murders throughout the plot. The artwork is sketch-like in nature, and solely in black and white. It updates on Fridays.

The artist mentions David Hopkins, the artist of the Jack comic, as being his inspiration for creating Slop after he drew three pages for the aforementioned comic, which later disappeared.[1] David Hopkins recently stepped in to return the favor when Mulefoot was unavailable for a short time. His FAQ also clarifies that Slop is not in the "same universe" as Jack or Rework the Dead. Slop was previously featured as a link on Jack's website.

Mulefoot is drawing some of the images for a secret side comic during the "Two For You" Jack story arc. Although the second and third pages were drawn by Midgee, he wrote all five of the secret pages.