Slightly Damned is a webcomic created by The Chu. Launched in 2004, it is a comedic, character-driven fantasy/adventure webcomic set on another world with tangible Heaven and Hell, and original species. Originally updated weekly, it sporadically received multiple updates per week before officially adding Wednesday to its update schedule in December 2011.

Slightly Damned is about the misadventures of Rhea Snaketail, a female Jakkai who is killed at the onset of the comic. Her soul is judged by Death, the comic's equivalent of Anubis, and is determined to be unfit for Heaven, Hell, and even Purgatory. As a result, she is sent to the so-called "Ring of the Slightly Damned" (hence the comic's name), which is a nearly-barren wasteland outside Hell proper. There, she meets a wimpy and clumsy but well-meaning fire Demon, Buwaro and his siblings, Sakido and Iratu.

Later on, Rhea escapes back to Medius, the world of the living, with Buwaro in tow. There, they come across a peculiar white bunny, which they name "Snowy". Rhea and Buwaro later discover the bunny is actually a lost Angel named Kieri Suizahn, who fell from Heaven with her brother and friend in much the same way that Rhea and Buwaro ascended from Hell. The unfortunate Angel was subsequently cursed by a trickster rabbit demigod; as a result, she is occasionally forced to assume the form of a lop-eared white rabbit. The trio then travels the countryside, meeting a varied assortment of other characters as they attempt to reunite Kieri with her missing brother.

The following descriptions have been adapted from the information located on the Slightly Damned cast page with permission from the artist. 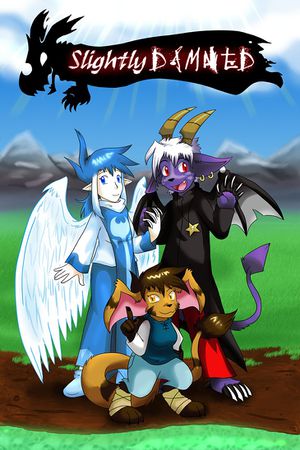 The main cast of Slightly Damned, from left to right: Kieri, Rhea, and Buwaro

Rhea is a Jakkai who was sentenced to the Ring of the Slightly Damned in Hell after she was mysteriously murdered. Unlike most members of her small, kangaroo-like species, she was not very religious before she died. Her last name comes from her unusually long tail. Rhea is cynical and easily angered, but has a good heart. Rhea likes to tease people, especially easy targets like Buwaro and Kieri. She has a bad habit of trying to overburden herself with responsibilities. Rhea watches over Buwaro and Kieri like an overprotective older sister. Incidentally, her favorite food is rabbit. She possesses Earth magic, but is admittedly not very skilled at it. Her original death happened when she was stabbed through the heart by an unknown assailant while running from her village. Following her resurrection, she has a scar where she was stabbed.

Buwaro is a fire Demon who hails from the Ring of the Slightly Damned, a ring so barren that it's not usually counted as a part of "real" Hell. He spent most of his life completely alone with his pet rock Thadius before Rhea arrived, although Death and his older sister Sakido visited him occasionally. Buwaro is naive and foolish, but ever since he met Rhea he has been improving. Despite being a Demon, Buwaro is very kind and tries to become friends with everyone he meets. He loves Rhea like a family member, and cherishes his friendship with Kieri due to her gentle nature, eventually falling in love with her. Originally lacking a surname (demons typically don't have last names), he eventually adopted the last name of the Angel who originally raised him in the Ring of the Slightly Damned.

Kieri is an Angel from Heaven who was cursed by Toski, one of the Twelve Guardians, so that she would occasionally turn into a snow bunny. She is from the Suizahn warrior clan, masters of the Water element, but was more interested in scholastic pursuits than fighting. She was also a victim of abuse from at least her mother. Not long before Rhea and Buwaro escaped Hell, she was cast from Heaven along with her twin brother Kazai, one of their Angel friends, and an unknown Human, leaving them trapped in Medius. She was terrified of Buwaro when they first met. However, when she saw that Buwaro was friendly (and harmless), they quickly became friends. She later developed a crush on him, and they eventually fell in love. Kieri also looks up to Rhea for her confidence and savviness, as she herself has low self-esteem. But although she is very shy, she is quite powerful in combat, wielding her sword along with water and holy magic with great skill. Buwaro insists on calling her "Snowy", a name he gave her when they first found her in her bunny form.

Buwaro's older sister was a wind Demon who used to live in "real" Hell before moving to the Ring of the Slightly Damned. Although Sakido made her home in the same Ring as Buwaro, she lived alone. She originally abandoned Buwaro, but would eventually start visiting him. Unlike her younger brother, she was always very quiet and serious. She liked poetry, encouraged by an unknown pen pal, and would viciously attack anyone who insulted her poor poetic talent. She also had an understanding of the Angelic language. Sakido was initially suspicious of Rhea when she first came to Hell, but eventually opened up to her. Sakido died while bringing Buwaro and Rhea out of Hell, shot by a Holy Arrow, and is buried in Rhea's grave.

Iratu is Buwaro's oldest sibling and an alcoholic. Towering and wolf-like, he is a behemoth even amongst earth Demons. Normally he is very playful and snarky, but he goes berserk if someone disturbs his sleep when he is hung over. Iratu lived in "real" Hell, far from his brother and sister, and rarely visited. His trusty friends include a fire Demon named Azurai and a wind demon named Tsavo. He escaped to Medius with his friends before Sakido escaped with Buwaro and Rhea. He and his friends are currently causing a ruckus on Medius, along with allied Medians.

Darius is an Angel descended from the Elexion warrior clan, which mastered the Earth element. He is a top-notch warrior who earned all three angelic power necklaces, but was not interested in fighting himself. It is also suggested he is gay. He ended up cast in Hell during the Great War 15 years before the comic began, where he was disgusted by the slaughter of innocents by both Angel and Demon alike. He eventually raised Iratu and Sakido, and later Buwaro, who was hatched under his care. All three were orphaned; Darius had to bury Sakido's mother and Buwaro's parents personally.

Buwaro was hurt while in the egg, causing him to go berserk when he hatched, and later unwittingly took Darius's right eye. Darius kept Buwaro asleep until an experiment allowed him to use one of his power necklaces to keep Buwaro from going berserk. Darius eventually gave his other two power necklaces to his other children, which fixed Sakido's broken wings and made Iratu grow huge. He was mortally wounded by another demon, and arranged for his "children" to live in Hell. Buwaro now possesses Sakido's power pendant, bequeathed to him when she died, which gave him wings as well.

Lazuli is an ill-tempered water Demon with a vendetta against Kieri. She and her Minotaur-like comrade, Talus, kidnapped Kieri and separated her from her brother and his friend. Thanks to the help of Buwaro and Rhea, Kieri escaped from their clutches. Talus was killed in battle by drowning, and Lazuli was left with a scar in her side from Kieri's sword. She is now searching Fragaria in order to get her revenge.

Cliff is a Human who wanders around Medius along with his wife Miranda, neice Samantha and his best friend, Duster, a Fairy. A travelling salesman, he has connections to many on Medius, including some of the supernatural guardians of the world. Cliff can combine with Duster to use powers that challenge even the most powerful warrior Angels. His uncle, Seymour, is dead after a ill-advised stunt gone wrong, and is currently trying to swim the River Styx to escape Hell.

Miranda was pregnant when they met Rhea, Buwaro and Kieri. She gave birth to her and Cliff's daughter, Florina, while the group was in St. Curtis.

J is a Human friend of Rhea's. J regularly keeps contact with Rhea after her return from Hell. He warned Rhea that Lazuli survived their first encounter.

Ramirez Bloodeyes is a male Jakkai who was Rhea's best friend before her death. His last whereabouts are that he left Rhea's village to study medicine in a big city, but it is unknown exactly where. He recently contacted J, sending him a latter saying he was now working as a doctor in Ghardin City.

Moonshade is a male Jakkai that is allied to Iratu. He arranged the slaughter of anyone else in his bloodline. Although it is not confirmed, it has been suggested that Rhea's death may be connected to him.

Crunky is a Wright wyvern chick. She was found at the St. Curtis festival by Buwaro, who then gave it to Kieri when it took a liking to her. Crunky's name was from Buwaro getting the word "crunchy" wrong when he was compared in appearance to a popcorn ball in St. Curtis.

A new official reboot of "Slightly Damned" by the original Star Force Media cast has been announced by Mythwork Studio Youtube Link.

A fan project is under way to adapt Slightly Damned into an internet radio play, similar to the DMFA Radio Project. As of February, 2013, four episodes are available for download on the project's page.

A non-canon supplemental project, "The Legend of Buwaro: Soprano of Time", acts as a parody of The Legend of Zelda with the Slightly Damned characters. New episodes are posted occasionally as incentives on the Top Web Comics website. Chu also posts previous comic pages on her art pages at DeviantArt and FurAffinity.

In 2013, Chu launched a Kickstarter project called the "Slightly Damned Plushification Project". The original project was to raise $3,000 for a Buwaro plushie with black-and-white tags. It eventually raised $27,905, enabling the creation of plushies for Buwaro, Rhea, Kieri, Sakido and Iratu all with color tags, and a 7" Squishable of Crunky.