SliderFest is a LAFF function that takes place at White Castle, that spun out of the idea of SliderCon, but has no other connection other than the locale. While SliderCons are typically tied to LAFF outings, such as LAFF bowling and local conventions, SliderFest was imagined by Nihaler Fox to be a freefloating version. Along with his mate Rayven Wolffe and best friend Ken Redtail, they developed the idea of a meet that was the real life equivalent of open source software. The idea and concept would be there, but anyone could host one at any time, anywhere. It was Rayven Wolffe who came up with the name SliderFest, after having read it on their drinking cups. To date, there have been several dozen SliderFests, held throughout the Chicagoland, Wisconsin and Indiana area. 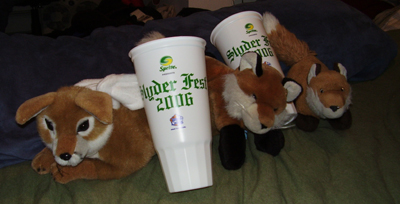