SliceOfDog (or Slice) is a British furry who joined the fandom in 2007, and is mainly active within the furry community on deviantART, Fur Affinity and SciFiFur.net. He is a writer and voice actor, although he joined the fandom as an artist, and his fursona is an anthro Doberman Pinscher. 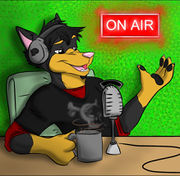 Slice is the Forum Director of SciFiFur.net, as well as the organizer of its podcast the Xeno-Anthros Podcast.

Slice guest-hosted Episode 5 of the original incarnation of Radio Free Housepets! on August 20th, 2011, after that episode Slice was invited to become a full time co-host until the show's indefinite hiatus in July 2013.