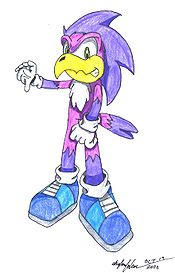 Skylar Falcon, also known as Skylar, Skylar T. Falcon, and the Canadian "Eh"-vian, is a furry character from Furs4You. Residing in Toronto, Ontario, he is the only Canadian fur on the site and has remained so since his joining in around 2005.

Skylar, who is both the fursona and the creator, is a seeker falcon, or falco cheerg, normally a resident of Europe and Africa. Why he came to Canada is a mystery, but there are rumours it is due to a smuggling ring that was capturing these birds and selling them for experiments.

This is also rumoured to be the reason for his strange colouration; purple and magenta, as well as why he is not a bird but a furry. Apparently the experiments were illegal and right after his creation, they ceased. Skylar escaped to Toronto.

Skylar is a Sonic-style character, or a Sonic fan character.

Skylar is on Furs4You or Fur Affinity.

Other characters he has created are Brent MacWolf (a German Shepherd spy for his books), Todd Hakusho (one host of the Sonic Show), and Wyverna Fillips (who is in his newest novel)