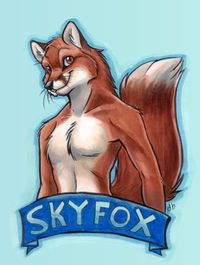 Skyfox (born 1975), is a male furry writer from the Great Lakes region of the USA. He became a part of the furry community in 2008 after being a fan of the artwork for many years.

Skyfox began using this name in early 1999 after browsing his list of game titles for his Commodore 64, and choosing the name game from Skyfox II. He first began using it in the chat rooms of the now-defunct LiveUniverse.com website with the user name Skyfox1 (the user name Skyfox had already been taken by someone else who never logged in).

Through those chats Skyfox met many people who were furries, and through them was introduced to furry artwork. That began many years of enjoying the work of furry artists while not personally considering himself a furry.

In 2008 at the strong invitation of a friend, Skyfox attended his first furry convention, Anthrocon 2008. Very quickly, he felt he found a home within the furry community, and started being a full time active participant, including attending other furry conventions such as Midwest FurFest and Furry Connection North.

Skyfox is primarily an amateur photographer at furry conventions. He is not an artist, performer, or musical composer, but is a great fan of those in the community who do have the talent. Skyfox does not own or wear a fursuit, furry ears, or tail, but does wear a dog collar to conventions.

While not an artist, Skyfox has written one novel of furry science fiction, Windows to the Soul, with thoughts of writing a sequel. He has also written a few pieces of poetry, mostly furry-related and some being fan art poetry inspired by works of furry artists.

Skyfox is very proud to have purchased many con badges and other artwork and commissions from various artists.

Skyfox's fursona is a bipedal male red fox (vulpes vulpes). Whilst Skyfox is heterosexual in real life, his fursona is bisexual.