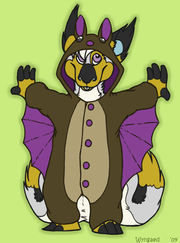 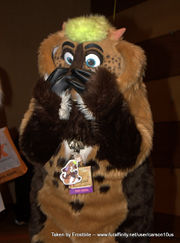 Skwerl, also known as JAMO, Tonkzilla, and Snotbelly, previously as Wyngaed (born March 1, 1987), is an artist who lives in Minnesota, USA.

Skwerl's main online avatar is a mutated European red squirrel that is permanently in her winter coat.

Skwerl's fursuit is a mixed candy goat named 'Sodapop,' and it has been to Furry Migration, Mephit Fur Meet, and Midwest FurFest with it.