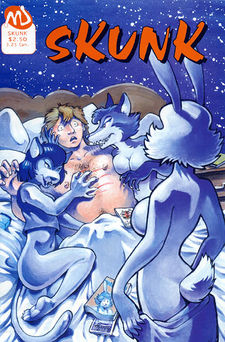 Skunk, a comic based on the term and theme

Skunkfucker is the earliest known derogatory term to define a furry fan or artist.

This term came to be in the early 1980s at popular Sci-fi conventions like WorldCon, by science fiction fans who looked on furries attending their cons as both intruding and beneath contempt. This view did not improve when the earliest examples of sexualized furry art and stories started to appear at the scene.

As described by Sci-fi/Anime/Furry expert Fred Patten, early use of the word was as a defacement of furry party signs posted at these conventions (including the ones hosted by one of furry fandom's founding members, Mark Merlino). The act would consist of swiping down the signs, or just crossing the word "Furry," with ones that would read "This way to the furry Skunkfucker party", an act also confirmed by artist Marc Schirmeister (who was also a Sci-fi fan and artist),

The term used to be a well-known, demeaning vocal identifier by a wide array of fandoms, non-furs, and furry critics, but has largely fallen out of common usage. As a note of historical interest provided by Fred Patten, Foxfucker was another Sci-fi used term for furries but never caught on.