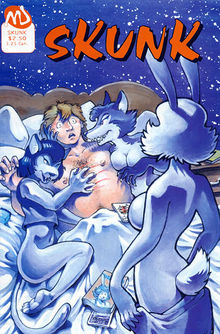 Skunk is a black-and-white one-shot comic published by MU Press in 1993, which features satirical jabs at the furry fandom (the title itself was short for the anti-furry slur, "skunkfucker").[1]

Neko tells the artist that he created them and wanted them to be real and that they became "a lil' more [real] each time you wanked off to us!" The fox woman asks him when the last time he fantasized about human women were, and Bunnita says that he is now stuck with them. The artist screams and finds himself laying naked in bed, with no furry women around him. A female neighbor, worried after hearing the artist scream, knocks on his door. As the artist drifts off to sleep with thoughts of furry women in his head instead of answering the door, the neighbor dismisses him as "kinda reclusive... probably some sort of... weirdo..." A concluding caption reads:

Donna Barr, the author of the strip, adds footnotes on the bottom of each page:

Page one: by Donna (They asked me!) Barr 93© (But it is in exceedingly bad—even nasty—taste).

Page two: But then, the subject's pretty jolly nasty.

Page six: Death of the middle-class white boys. (Regardless of color or gender). David Koresh is not alone! (A.T.F. should hire me—yes.)

As one of the furry women gets on top of the cat-like furry, a beep sounds. It is revealed that the world presented in the comic thus far was taking place on a computer being used by a human man. The man's monitor screen reads:

The man then dials "Furhaven", retrieves a beverage from his refrigerator, and returns to tapping on his keyboard.

The Fur Flies to France[edit]

The Fur Flies to France, by Colin Upton, concerns the roman à clef misadventures of a boorish American comic artist called the Goat — a barely disguised anthropomorphic version of furry artist Jim Groat — who acts like an idiot abroad and runs into trouble with French customs.

The strip was based on a true story:[2] France's Angoulême International Comics Festival, one of the world's most distinguished comic conventions, and the (mis)adventures of Edd Vick's MU Press and several American artists such as Donna Barr, Colin Upton, artvixn, Jim Groat, Steve Gallacci, Fred Patten, Dwight Decker, and Monika Livingstone at it.

Art by Marc Schirmeister, under the one time handle Cynicus.

The release of the comic drew criticism[citation needed] around the fandom, as it was penned in the same satirical vein as Shawn Keller's Horrifying Look at the Furries. One particular strip that was most criticized was "The Fur Flies to France".[clarify][citation needed]