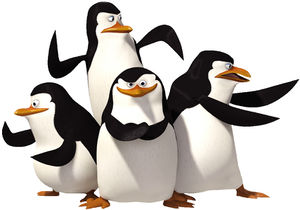 Skipper is the leader of the penguins, whose leadership remains unquestioned by the others. Despite being firm and practically incapable of relaxation, Skipper continues to lead the penguins to success on almost every mission. It is rumored that he and Marlene are in a romantic relationship.[citation needed] In all media, Skipper is voiced by his creator, Tom McGrath.

In the Madagascar films, Rico is a mute from Antarctica who acts rationally and is loyal to Skipper and the others. In the Christmas special The Madagascar Penguins in a Christmas Caper and the consequent TV series The Penguins of Madagascar, Rico has become an almost psychotic penguin with spiked hair, a scar down his face and the ability to regurgitate all manner of inanimate objects. In all media, Rico is portrayed by John DiMaggio and by Conrad Vernon in the 2014 film.