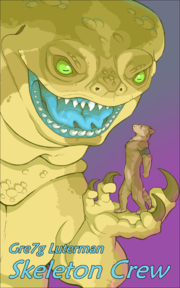 Originally released as a serial, then self-published on Amazon, it will be republished by Thurston Howl Publications in summer 2017.

The science fiction story follows Kanti, an anthro-kangaroo alien known as a geroo, and his life aboard the generation spaceship The White Flower II -- and how his mistakes could lead to the death of all ten thousand geroo on board the ship.

This story builds on the Hayvena Celestia universe, revisiting characters Captain Ateri, Commander Jakari, and introducing Commissioner Sarsuk -- an anthro-dragon known as a krakun -- who had been mentioned in Griffin's Ten Thousand Miles Up. The novel explains how the krakun keep the geroo in eternal slavery by basing the ship around a mysterious Trinity of technologies. The tale touches on their spirituality and customs of a people who are not allowed to live beyond the age of sixty.

Many artists provided artwork for the second edition of Skeleton Crew, but the third edition will feature only Griffin's artwork.