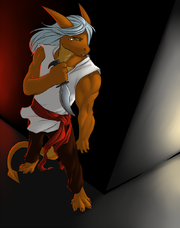 Sjach has much in common with Dungeons & Dragons-style bronze dragons, at least personality-wise. He is seen by most as having no wings, though they are present when needed. The wings themselves seem to be made of some kind of force, or ki/qi. Sjach tends to favour billowy clothes, calling them 'poofy sleeves' and the like.

Dragonkin is simply an adopted name, and by all means truly has no last name as of yet, though there is theory that Bazil Dragonkin might have adopted the unlucky soul into his household.

Sjach also responds to the nickname DarDar, though only a select few are actually allowed the privilege of calling him that.

Sjach stands at six feet, three inches, in height. Long horns protrude from the platinum locks adorning his head, clad in deep dusk-orange scales, to the point that it would almost seem black in several places along his body. Hair has been pulled back about where the horns rest, into a tail, or sometimes just to hang loosely about his shoulders. Eyes of a green hazel, almost cyan, in colour embed themselves just beneath the brow-ridge. Further down below the eyes, the scales take on a peculiar pattern. One triangle of white juts out just behind and below the eye at a forty-five degree angle. From about a few millimeters away from the triangle, two more triangles jut out from the sides not accompanied by the eye. The pattern naturally (or not so) repeats upon the other side of the face.

Upper chest is clad in a white shirt, though partially torn and resown to keep from tearing further, exposing the upper chest to about mid-stomach. The sleeves seem in more or less fine condition, before they hang open around the middle of the wrist itself. Besides behind the belt's adornments of a couple of pouches and slightly curved scimitar, the untucked shirt hovers around upper thighs, where the green breeches fall into thick boots around mid-shin, billowing and folding around with very little care to anything that might be considered neatness. From the back, a diamond has been shorn so that the thick orange tail might protrude from the back, to freely do what it wishes.

Sjach's player is a MILFur in the U.S. Air Force, current stationed at Hurlburt Field, Florida. He has been known by many fursonas, even before he heard of the furry fandom. First was Vexz, a character he played on Furcadia for a clan known as the Firewolves, followed then by Kirimadd, a bronze dragon. There was a phase in which Sjach thought there were too many dragons in the fandom and became a lizard, but his friend Lenka convinced him otherwise and he returned to being a dragon.

The fursona "Sjach" started out as a half-breed mouse with the last name of 'Whitefur', then later 'Dragonkin' as Sjach developed in story, long before the character became his own personal avatar as well. The fursona is still a work in progress, and is quite similar in the personality to the player himself.

Sjach is an artist, and occasional story writer, but, due to work, has problems actually creating works at times.