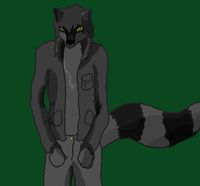 Sirru (also known as SirruRaccoon, tntdynomite92, and Timothy Taylor; born July 31, 1992) is a furry artist who lives in Northern Mississippi, U.S.A. His fursona is an anthropomorphic raccoon.

Sirru suffers from NPD and, as such, is frequently working to falsely receive constant admiration from others, usually by means of proclaiming to be whatever the year's controversial self-identity is. As of 2016, Sirru identifies as a transgender. Prior to this, he very vocally identified as a satanist, a stoner, furry, brony and anarchist.

He is on Second Life as Sirru Avelino.