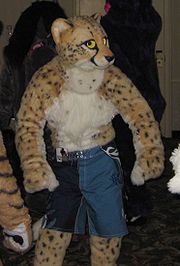 Single Speed Cheetah,[1][2] also known as Lone Fox[3] (or by his LiveJournal username Lonefoxx), is a fursuiter with two fursuits. A fursuit of his cheetah character, Single Speed Cheetah, was made by One Fur All Studios. He also has a Lone Fox fursuit.[3] His cheetah name comes from his love of mountain biking and the type of bicycle he rides.[4]

Single's been a costumer since high school when he was a Jawa for Halloween. Afterwards, he earned a full music scholarship to USC. After graduation, he took up a position as a member of an orchestra overseas, where he stayed for six years before returning to Arizona to take up a position at a Tucson-based company. After three more years, he relocated to Maryland, but planned to return to Arizona in 2008.