Sin Kaline is a fur who originated from Rosemead, CA. As of 2009 he has relocated to Encino CA. He has been apart of both the furry and therian communities for most of his life. As it stands he currently has four primary fursonas: Sin, the Kaline (a wolf/snow leopard and Clouded Leopardhybrid), Gensis (a wolf/eastern dragon hybrid), Felony, who is an Iberian Lynx, and Charles, also known as Charley who is a chinese crested dog. 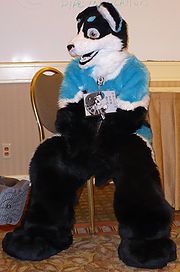 Sin uses 2 fursuits, though he has had others in the past. His most popular suit, Champ; a border collie, debuted at Califur 2008. Within the day he soon became a smash hit and a highly recognizable character. Champ was designed by Sin and built by SlapHappyBunny who was able to complete it just in time for Califur. It was in this suit that Sin co-ran the "Fursuit Performance" panel and aided greatly in the "Fursuit Show-And-Tell." Through this, Sin was offers a role oin Califur's fursuit staff. He kept this position for two years.

His other fursuit consist of; 2-D Lemur, a character based on a member of the animated band, Gorillaz, Scooter; a female Shepard dog, and Zeek, a fennec fox.

2-D is partial suits, Scooter is a 3rd, as is Zeek. Champ's head has recently been rebuild by sin himself.

While Sin prefers to work mostly in digital media, he also does traditional media. Posting mainly on Fur Affinity, he does take commissions and is almost always open for them.