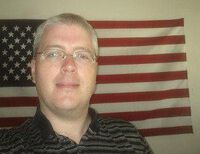 Simba discovered the furry fandom in 1996. Being a fan of Walt Disney's The Lion King, and identifying closely with the lead character Simba, he chose the nickname "SimbaLion" and created a character to match (he would later legally change his name to Simba Lion).[1]

Having seen furry comunities in such large urban places like Chicago, California, and New York, among others, Simba wondered why a similar community did not exist in Michigan. Taking matters into his own hands, he created the MIFur mailing list and began hosting regular events. The MIFur community is still going strong. Its members have started two conventions. [2] [3] There was a third convention, Furry_Connection_North, which has since ceased operation.[4]

From 2000 until 2010, Simba was a member of the security team for Midwest FurFest. He began volunteering for Anthrocon in 2001, where he worked in the Audio and Video department. In 2006, he was invited to join the Board of Directors and accepted the offer.[5] Simba resigned from Anthrocon staff following the 2009 convention.

In addition to the traditional A/V duties, SimbaLion also coordinated the Anthrocon dances and booked DJ talent. At this same con, he pioneered the practice of promoting new musical talent by aggressively pursuing new DJs and offering shorter sets, usually one hour long, so that more DJs could be booked each venue night.

On November 19, 2019, Simba Lion shot and wounded two Monroe, Michigan police officers at his apartment following a dispute with the complex' maintenance man, and was hospitalized in critical condition after receiving return fire.[6]

Simba Lion died on December 1, 2019, due to the injuries sustained during the initial ambush.[7] [8]