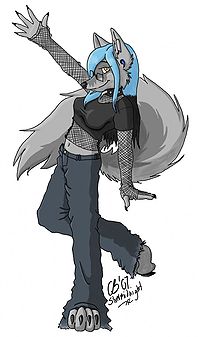 Silvermidnight (born 1985) is a furry artist who has been drawing since 2003. As of September, 2007, she is mated to Kitmouse and living with him in Canada.

Silvermidnight prefers using Open Canvas (aka OC) as her medium, and her style, while not cartoony, is not realistic either. She uses minimal shading, but enough to add texture and depth to her images. She prefers drawing canines, but does on occasion draw other species.

Silvermidnight has a list of characters which she draws fairly often:

Silvermidnight also has a few personal characters which she considers to be a part of herself: Ty'Ski, a badass-looking Wolf; Ta-Leil, a grey and blue Cloud Dragoness; Dunnan, a Little Red Flying Fox/ Spectacled Flying Fox Bishounen hybrid; and Kamaria, a Margay whom she has yet to draw.