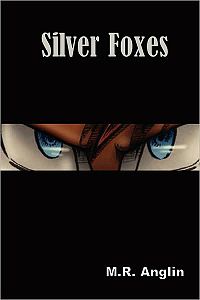 Silver Foxes is a book starring anthro characters, written by M.R. Anglin and released in May 2008.

Started by Anglin as a form of stress release and a reintroduction to the fun of writing, Silver Foxes was first released on her deviantART page. After deciding to release the series in print, the author has since taken down the stories but leaves the first section of each story as a preview.

The book details the story of J.R. Dunsworth, who finds two kits in the middle of the ruined city of Jelu. He takes them in, intending to dump them on someone else as soon as possible, but instead finds himself taking them in and raising them as his own.

Still, the life he left behind calls to him, so when Vix appears and proposes a dangerous job to him, he leaves his two charges in the care of trusted friends and departs to engage in the life he once knew. But when the GFG Corporation comes into town and kidnaps them while he's gone, he leaves the job undone and travels across the country to find them and bring them back home.