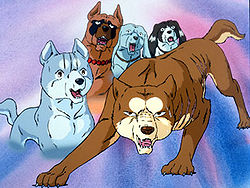 Ginga: Nagareboshi Gin (銀牙 流れ星銀) (Silver Fang in English speaking countries; Hopeanuoli in Finland where it has become widely popular) is a 21-episode, 1986 anime series. It is based on a 1984 manga by the same name that was created by Yoshihiro Takahashi, who was inspired by a news article which told of hunting dogs that had been abandoned by their masters and had begun living as wild animals. The manga originally appeared in Japan's Weekly Shonen Jump.

The anime tells the story of an Akita Inu pup called Gin (Japanese for "silver") who abandons his owner, a young boy named Daisuke, to join a pack of wild dogs. The pack is gathering strong dogs from all over Japan to fight a deranged bear named Akakabuto and his minions.

The anime was made for Japanese television by Toei Animation, a studio famous for its Dragon Ball Z anime. In western countries the anime was released as a set of four VHS tapes, and severely censored in order to lower the age-limit, which was quite high due to the level of violence and gore.

Interestingly, the anime has become extremely popular in the Nordic countries (particularly Sweden and Finland). In 2003 the uncensored and non-dubbed version of the cartoon was released in Finland and Sweden as a 5 DVD box-set.

Gin, a tora-ge akita, son of Riki and Fuji and grandson of Shiro is chosen by Daisuke's grandfather to be trained as his new hunting dog after Riki's 'death'. While training, he leaves his owner, Daisuke, to join a group of wild dogs with his father who has lost his memory. Together will the pack of dogs, Gin must overthrow Akakabuto, a great demon bear, and reclaim the mountains of Ohu!