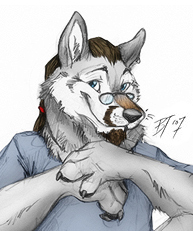 SilverTail (born September 3rd, 1980) is a furry who lives in Renton, Washington, United States. His fursona is a hybrid of a grey wolf and a cougar.

SilverTail discovered the furry fandom on July 20, 1996, shortly thereafter creating a character on Tapestries MUCK that was to become his fursona.

His character underwent several changes between creation and the present, originally a quadrepedal grey wolf with silver fur, reflecting his name. Later the character evolved into a bipedal wolf with only a silver-furred tail which he remained for several years.

In mid-2003, a friend depicted the character with the glasses, long hair, and beard his real life counterpart wore, which have since become signature characteristics of SilverTail's design. In 2007, SilverTail decided make the character a wolf-cougar hybrid and incorporated the muzzle marks of a mountain lion into his appearance.

Originally the character's age matched that of his real life counterpart, but as he moved into middle-age, it was decided to keep SilverTail vaguely in his early 30's. Silver self-identifies as a Greymuzzle, the character and player having both been in the fandom for 20+ years.