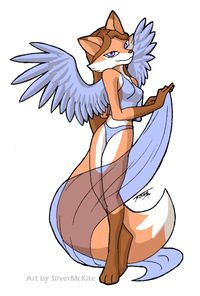 SilverLynx's Furry style!
SilverLynx is a bisexual female anthro artist, animator, fantasy artist and furry. Because of her unique beliefs about her fursona some also refer to her as an otherkin or shaman. She usually goes by "Lynx" in the furry community.

Lynx, like most furries, discovered her nature at a young age, along with her drawing ability. Drawing herself as various types of cat creatures became more refined over time to settle on the lynx totem, and she may draw herself as anything from a were-lynx to a nearly human character with stripes on her face and lynx ears. She became involved in the furry community as early as 1996, taking the name SilverLynx when told that Lynx was too plain. Throughout the years, her participation in the fandom has been minimized to art and internet communities only. She has taken many breaks from the fandom, rarely explaining why. She usually returns every few years with new art.

Lynx has mentioned that her fursona is something totemic and spiritual to her. While she does have a fursona that is animalistic as most furries do, she generally calls her fursona her soul. She has on occasion referred to her totem animal as a lynx, or stated that she has been touched or visited by a spirit of a lynx. She has been referred to as otherkin for this reason, but she prefers the self-coined term 'shamanistic furry'.

Lynx's art ranges all over the place, but usually rests in a vaguely BTAS/Gargoyles/Disney style. She does do some anime-influenced art, but generally only while on commission. She works digitally for most of her work, but also does paint in oils, acrylic, gouache and watercolors from time to time. Her painted work is similar in scope to her drawn work, but often has a stronger 'realistic' style.

Lynx has occasionally run into some confusion, as there is a male anthro artist who also goes by the name of SilverLynx. On websites where she has already taken the title, he goes by SylverLynx; on sites where he has it, she goes by SliverLynx.

Lynx has also gone by the nickname SliverMcKite - some of her work from 2004-05 is attributed to this name.