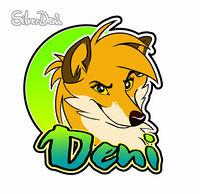 Silver Deni (born December 24)[1] now known as Synthucard is an anthro artist and animator who lives in Romania.[1] Their main character is a silver male Maine Coon cat.

Their fursona is a male shapeshifting Maine Coon named Denucard, while the other was a female dingo with tiger and wildcat forms.

Much of Silver's style is influenced by the movie Balto and various anime films. In December, 2010, Silver's artwork appeared as a banner on Fur Affinity ("December Banner No.: 3 (Christmas)").[2] As of January, 2011, they are attending university, majoring in art.