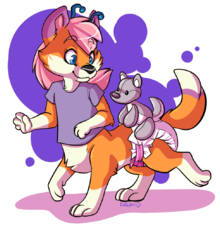 Shyanne is a digital artist and a fursuiter from Batavia, New York, U.S.A. Hir fursona is a alien foxtaur, who was stranded on Earth after getting separated from hir family. Shyanne is a herm and has a set of antennae that can be hidden away if needed. Shi is still a cub and is usually quite rambunctious/hyper. Her loving mate, Cyrus is a fruit bat and is rather passive but keeps Shyanne in line.

Shyanne started becoming involved in the furry fandom around 2006 and first joined deviantART, and in 2007 he joined Fur Affinity. He began as a lombax (from Ratchet and Clank), then a fox, then a meerkat, then a cat, then a fox again and then settled with a foxtaur character. As a little kid, Shyanne loved centaurs before he even knew what furries were, and that part carried over and is why he's a taur today. Shyanne has always been fascinated with space exploration and to this day imagines flying a ship of hir own.

Shi is mainly known though the fandom through hir fursona Shyane's appearance and species. Shi started off writing short stories and poems but started drawing mostly as a way to see if others would comment or not and liked drawing very much and he still tries to improve everyday. Shyanne is mainly active in the Babyfur community, and although shi roleplays as a mommy at times, she is mostly a cub as well as a cub at heart in real life. 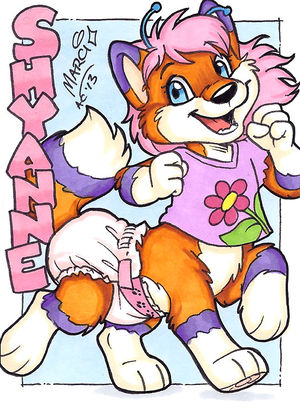 Shyanne is a alien foxtaur. While shi has the body of a normal foxtaur, she has two blue antennae atop hir head. Hir main fur color is orange and purple markings around the arms and ear tips, around hir tail, and legs. Hir arms, belly, tail tip, and feet are white. Shi has long, straight pink hair, and blue eyes.

Clothing-wise, Shyanne is either seen naked, in a diaper when in hir Babyfur form, or a yellow T-shirt. Shi doesn't like to wear pants as most taur pants are uncomfy/confining to hir. Shi is almost always in taur form.

Shyanne's race of aliens is called the Kólnari, a race of taurs (mostly foxtaurs though). They possess mental capabilities such as levitation, telekinesis, and telepathy, and are very skilled technicians. They live upwards of 600 earth years, and their aeging process is very slow. All Kólnari are herms, and when two partners mate it is usually unclear which one was the father or the mother. They do mate for life however and form a very strong bond, able to sense one another even across vast distances. Usual telepathic range from Kólnari to Kólnari is about 10 miles. While alone with their own kind they tend to converse solely through telepathy. Their antennae help them with their mental capabilities and they would no longer be able to function/use their mental powers without them. Fur color/patterns and antennae color are genetic traits that are passed down from family to family. Typically a Kólnari family consist of 4-5 siblings and the parents. 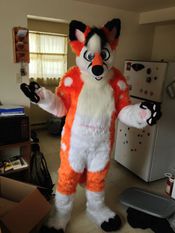 Due to her location, Shyanne only attends conventions that are along the east coast of the U.S., such as FurFright and Anthrocon. Her very first convention was FurFright 2011.

Shyanne was born in 1986 in Batavia, NY where she currently resides. She hopes to move to maybe Seattle, WA or maybe somewhere in the Midwest USA. In 2014 she completed her Digital Arts/Graphic Design AS degree. She currently works as a sales associate at Walmart.

Shyanne is also a fursuiter, who had her first fursuit made by Shengoh and her second/current suit (her first fullsuit) made by Phoenixwolf33.

Shyanne at one point also went by the name Leafchaser, as that's her clan or family's name, so her full name is Shyanne Leafchaser, though she's given herself an earth name of Shyanne Skye to fit in more on Earth.

In 2014, Shyanne herself started hormone replacement therapy and began to transition into a woman, and currently wants to get sex reassignment surgery sometime in the future.