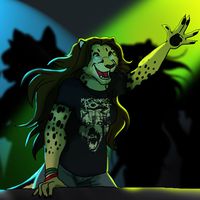 Shetani rocking out at a concert, drawn by AnnieHyena. 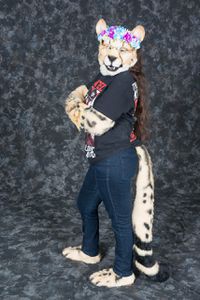 Shetani at Anthrocon in 2014. Photo by Dragonscales. 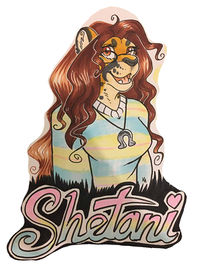 Shetani is a fursuiter living in the United States. Her fursona is a king cheetah.

Her interests include animals (especially cats), video and browser-based games, cosplaying, baking, and video editing. She is an avid collector of The Lion King merchandise and stuffed cheetahs.[1]

She first discovered the furry fandom in the early 2000s via Lion King fanart pages and DeviantArt. Despite her immediate interest, she did not officially join until 2012 due to concerns about public perception of furries.

Shetani's fursona was created in 2012 after being urged by friends to make one. She is a naturally-colored female king cheetah who ages with her creator. Her distinctive markings include three black back stripes (the middle of which extends halfway down her tail), a black tailtip with two black rings, and black ear rims. She can be easily identified by her long brown hair and glasses, and always wears a silver omega pendant and three silicone bracelets on her right wrist. She is often depicted wearing t-shirts of My Chemical Romance, her favorite band.[2]

Shetani's fursuit was made in 2014 by MagpieBones[3] and debuted at Anthrocon that year. It is a use-your-own-eyes style fursuit that incorporates both the wearer's actual eyes and hair. Shetani chose MagpieBones as her fursuit maker due to a preference for realistic fursuits, as well as the maker's unique ability to accommodate her real hair and prescription glasses.

She is an active participant in the #FursuitFriday hashtag on Twitter and Instagram and posts a new photo of her fursuit weekly.

Shetani is not a skilled artist, choosing instead to support the furry community by commissioning art of her fursona. She has accumulated over 100 pieces of art over the years, most of which can be viewed on her Weasyl and Toyhouse galleries.

Shetani frequently uploads fursuit videos to her YouTube channel, and is most well known for her Pusheen Box videos.[4]

Shetani is an avid convention-goer, having been a long-time patron of comic, anime, and general fan conventions before joining the furry fandom. Since then, she has attended the following furry cons, both in and out of fursuit: