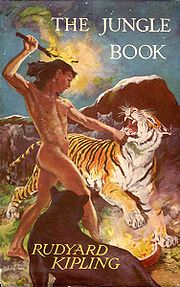 Shere Khan is a tiger character that first appeared in the book The Jungle Book by the author Rudyard Kipling, who was born with a withered leg and nicknamed Lungri (The Lame One) by his mother. Shere Khan was aggressive, arrogant and self-centered and saw himself as the rightful king of the jungle. The only one who looked up to him was Tabaqui the jackal. The worst thing Shere Khan knows are human people and when he finds out about Mowgli, he sends out to get his paws on him. But staying in his way are the bear Baloo and the panther Bagheera. Shere Khan has a big weakness and that is his great fear of fire.

Disney animated their very own version of Kipling's book which basically have the same plot and characters with small alternations. Shere Khan does not show any signs of being born with a withered leg and the jackal Tabaqui does not show up anywhere. But Shere Khan is still the villain of the story and is out to get Mowgli. The Jungle Book is one of Disney's most loved classic animated movies.

There was once also an animated series that had appeared in some European countries airing in the mid-90's, mixing in characters from both The Lion King and the Jungle Book, where Shere Khan was bossing around a wimpy Striped Hyena and was out to get Simba to put an end on him and become the king of the jungle. This was not animated by the Disney company but took a lot of ideas and character interpretations from it. It was told to be animated in France or Italy.

Since Shere Khan's popularity it became common to name tigers after him. Both plushies, wild tigers, and real tigers in zoological parks.[citation needed] But behind the name, Shere Khan was named after a king of the Khan clan which were living in parts of Asia.[citation needed]

In 1990 Disney released the series Tale Spin where most of the loved characters of the Jungle Book appear with more humanoid characteristics. In this version, Khan, who originally appeared in Part II of the four-part pilot miniseries for the show, Plunder and Lightning, is depicted as being neither good nor evil. He is the multi-millionaire businessman and president of Khan Industries, a company which employs mostly felines. He is mostly just concerned with his company meeting its goals (even if it means someone has to get hurt in the process), he will occasionally dabble in illegal operations, such as when he secretly paid the Air Pirates to attack his refineries and steal his oil so that he could raise gas prices.

Despite this, Khan has a deep code of honor. He always repays his debts and he never goes back on a deal with anyone... but he'll still exploit loopholes in order to defeat his adversaries. This was demonstrated when Baloo saved Khan's life and in return a grateful Khan offered to give Baloo anything he wanted. Although at first Khan was perfectly willing to give Baloo whatever he asked for, Baloo's ridiculous demands soon grew on Khan's nerves, and he had his henchmen kidnap Baloo and hold him for ransom, in order to teach him a lesson. Kit and Rebecca were forced to sell everything Baloo had acquired from Khan to come up with the ransom money. The henchmen then gave the money to their boss following Baloo's release. Thus, Khan won in the end without (technically) going back on his deal with Baloo.