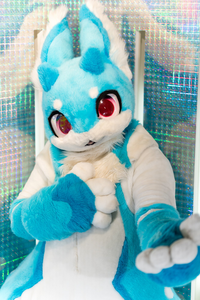 Sherbert Shenanigans, also known as RedHotYamada, is a furry YouTuber from the USA.

A magical creature from another realm called Lylasia where different species of magical creatures are locked in a Magical Beast War. Immature and infinitely curious, Sherbert accidentally triggers a portal and ends up in our world. Without any knowledge about our world and our ways, he vows to become a hero here...and battles other magical creatures who make their way across the rift.[1]

Sherbert was created by K-LINE for their Showcase series, and Sherbert is commonly known for suiting up as him at conventions starting with Midwest FurFest 2016.[2] He also created an anime and manga featuring Sherbert as well. In April 2019, Sherbert debuted a new K-LINE suit, named Razu, while in livestream. Razu is a pink kemono-style rabbit, and has started appearing in videos on his Youtube channel.