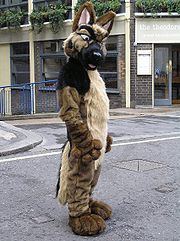 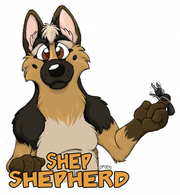 Shep Shepherd (born James Anness, November 1977, in Canterbury, England) is a member of the UK furry fandom. His fursona/guiding spirit is a black and tan German Shepherd. Shep first came across the organised furry fandom in late 2001 when he went online to search for cartoon images of German Shepherd Dogs for use in a presentation at work and stumbled on certain pages relating to the 'furry fandom'. He liked what he saw, and started to actively participate in the online furry community, making several lasting friends in the process and gaining a reputation for being humourous, open and friendly. Some time later, in late 2004, he attended his first LondonFurs meet and hasn't looked back since.

Until mid-2008 he was active within the LondonFurs community, citing being too busy at work and the perceived poor quality of a small but growing minority of attendees as being his main reasons for not attending most LF meets since late 2007. He was lead security of RBW in December 2007 and was lead security of the inaugural UK furry convention, ConFuzzled in 2008. All being well, Shep also hopes to assist in the same capacity at ConFuzzled 2 in 2009. Unsurprisingly, Shep has a police and private security background in real life, which he is happy to put to good use in the fandom. He has the distinction of having worn a suit and tie to the majority of furmeets that he has attended since late 2004.

Shep owns the Shepsuit, a fursuit based on his fursona that was made in mid-2006 by Brokken T. Wolf. Primarily commissioned for Shep's own pleasure, the Shepsuit has nevertheless brought joy and amusement to members of the furry fandom and the general public alike. As of November 2008, the Shepsuit is back with its maker, in order that alterations can be done to it to improve its looks, fit, practicality and durability. 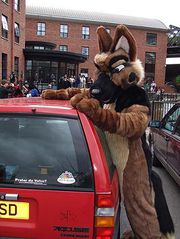 Outside of the furry fandom, Shep enjoys old cars, 1970s and 1980s nostalgia, travel (especially in Europe), food and drink, music, and polite company. He is a Volvo fan and his current car of choice is a red 1990-model 745 (affectionately dubbed The Volvo). It was Shep's intention to drive The Volvo to Eurofurence in summer 2009 with several other UK furs, as part of the Furball Run, but he has just taken delivery of a silver-grey 1997-model Volvo V70 (The Volvo 2, or 'TV2'), which he feels will be more able to cope with the autobahn network and will allow The Volvo to become his hobby car, rather than his daily driver/road trip car.

Shep's LiveJournal updates include the Shepfact; daily factual trivia which is often featured on TigerTails Radio, and Doggage; regular postings of pictures of German Shepherd Dogs and other dogs that Shep admires, including Siberian Huskies and Alaskan Malamutes.