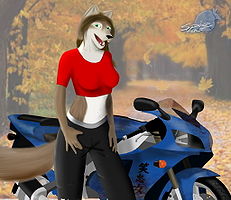 SheWolf is a very energetic Timber wolf that lives in the Okanagan Valley in British Columbia. She is 5'4", about 130 lbs and quite muscular for a female wolf. She has deep green eyes that change with her mood, which usually is comical. Her fur is tawny colored with the exception of her chest, tail tip, paws and part of her face. She has a white stripe starting from between her eyes that drops down past her muzzle, blending in with her throat and chest. Her paws and tail tip are also white. She has long light brown headfur that is past her waist which she usually has in either a ponytail or pigtails, depending on what she is doing for the day. She lives in board shorts and short tops, and tries to get away barefoot when possible. She also has 3 gold hoops in each ear.

Anything that involves mud really gets this wolfess going. She is an avid ATV enthusiast and can be found tearing up any mud hole she can find on her quad, given the chance. It's not uncommon to see her covered from head to tail in the slimiest, stickiest mud out there. She also loves to ride her sportbike, which is another deep passion. Tearing up the pavement on the rural roads and touching base with other fellow riders to go for back road rides is something she does on sunny days when there is no mud to be found. You can also find her beautifying the forest with her paintball marker on weekends when the urge arises. SheWolf founded and is the head administrator for the furry community forum, Fur4U where furries from all over the globe come to join in a close knit group. She was also an administrator for the furry web forum FurF where she had some very interesting initiation tactics for new furs that joined, but since the forum crashed she dedicates most of her time on Fur4U or helping her friends. She became well known as a prankster to begin with on another fur based forum which she was a moderator on for a spell, stealing underwear and sanity to unsuspecting furs,

Sanity Sucking drawn by Sigma
became a furry mother to many young furs throughout the fandom, then finally landed a permanent spot at FurF. After having enough of the drama from the other site, she continues to uphold the tradition on Fur4U. She is also a moderator for a local paintball forum, and is an avid participant in sportbike forums as well, doing the same goofy things she does to bring a smile and a laugh to those she meets. She loves to eat sushi, meet new people, and loves sports. She also loves to fix and repair her vehicles herself. It doesn't matter what the weather, she always finds fun things to do, and is always up for the challenge to try new things. SheWolf also likes to sketch when she gets spare time, doing the odd comic or wildlife crosshatch. 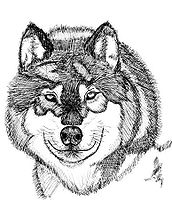