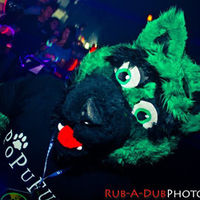 Shasta Wulftrax (born July 23, 1987) is an artist, musician, and fursuiter, who lives in Camdenton, Missouri, USA.

Shasta's fursona is a black and green wolf-coyote hybrid. He is 6'3", and has a radiation symbol on his left thigh.

Shasta has been part of the furry fandom since February 2012. As of march, 2014, he has attended:

In real life, is a self-proclaimed "Jack of All Trades", being a plumber, electrician, carpenter, and welder.

Shasta is an electronic musician, and posts regularly to his Soundcloud page. His production style is usually within the genres of Electro House, Trance and Dubstep

Shasta is also an accomplished DJ, and has performed numerous sets for fur groups and non-fur clubs alike. His setlists usually contain Dubstep, Hard House, Electro and Pop. One of his notable strings of setlists was performed at F3 Convention in 2012. He has also since performed at Oklacon, Wild Nights, Cosplacon, Memphit Furmeet, Central plains Fur Con, Midwest Furfest and Texas Furry Fiesta