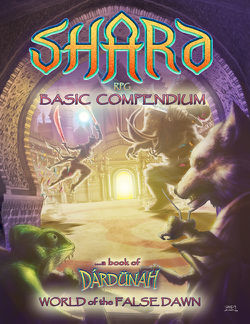 Cover of the Shard Manual

Shard by Shard Studios is an anthropomorphic heroic-fantasy role-playing game set in Dárdünah, the World of the False Dawn, a non-stereotypical fantasy setting which draws its influences from oriental culture.[1]

The game takes place on Dárdünah, a unique, crystalline planet orbitted by three moons and two suns. Albeit some ancient force cracked the planet at it's very core and thus seperated entire continents by deep, unsurmountable chasms, the world appears to be largely stable. Dárdünah is also called The World of the False Dawn. This is because due to the configuration of the planet's suns, the real dawn of the amber sun Lokáynü is preceeded by the gloomy, blue dawn of the holy sun Edü.

Metal deposits are wholly absent from this world, and thus most objects are being fashioned out of wood, chitin, a special tree sap called amber and of course, the ever-present crystals. These crystals however sometimes possess wondrous qualities. They can be treated with chemistry, magic or other techniques to suit many needs such as to form blades as hard, if not harder than conventional metals.

There are no humans on Dárdünah. Instead, the world is inhabited by a plethora of anthropomorphic races (more than ~90 types so far, 90 more being delivered with the next book Magic & Martial Arts) including Vajrah (mammals), Paksin (avians), and Sarpah (reptiles) with many different animal abilities such as Natural Weaponry, Flight, Venom, Thermal Sensing or Nightvision.

The setting substitute|substitutes many ordinary animals with exotic insectoid counterparts, called Suthras and many other alien creatures. There is also many examples of strange and dangerous plant life.

The societies and culture of Dárdünah have largely been inspired by oriental culture. There are many kingdoms with different types of regimes, such as the Amin, Khanate and Principalities.

The dormant religion is the polytheistic Mahist Faith. Mahists believe in deities called the Mother and Father, who came to their world and created their gods, the Devah, and subsequently them. This belief also incorporates concepts such as the Edge of Heaven where the deceased go to dance with the gods until they are reborn and the Swirling Hells of Narákah, where wicked souls receive punishment.

Most societies of Dárdünah follow a caste-sytem similar to the one present in India.

Shard uses a comparably simple but powerful D6 based roleplaying system which features about 37 Animal Abilities, 20 talents and 100 different skills with countless of specializations.

Combat in Shard can be performed with many different types of skills from brutal untrained brawling to graceful and refined martial arts techniques.

The magic in Dárdünah is of very shamanic nature. Magic users, the sirhibasi, traverse and utilize the dream plane, a ghostly world composed of magic and dreams, to peer into the future and past, manipulate their own or forgeign energy flows to endow magical items or heal mortal wounds.